BruchanasBunnahabhain 12 yo
Back to: Scotland 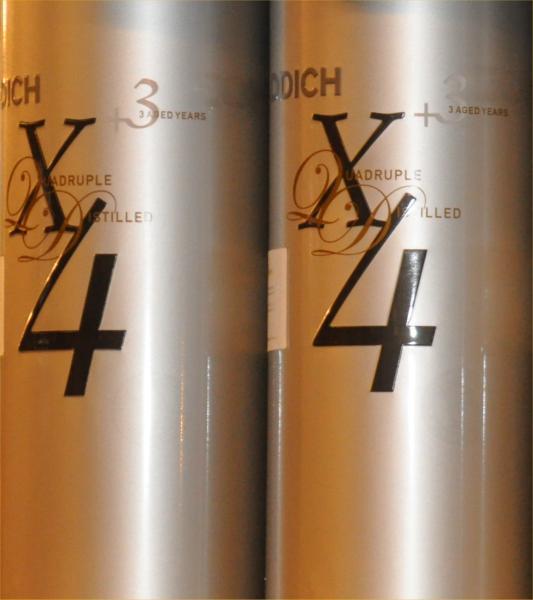 Specialist whisky retailer Royal Mile Whiskies organised a tasting of 126 whiskies during the Edinburgh Festival where customers voted on their preference.

Bruichladdich X4+3, our experimental, quadruple distilled single malt came 6th ahead of drams up to 13 times its age.

Earlier this year Bruichladdich X4+3 was infamously referred to as "not cooking oil. Not diesel oil. Sewing machine oil" by whisky guru Charlie McLean in a piece of self-confessed Burns’ Day mischief-making by Times hacks.

The BBC’s James May and Oz Clarke, acknowledging the extraordinary purity of the 4 times distillation, managed to power a sports car at speeds in excess of 100 mph using ‘straight-off-the-still’ X4, at an eye-watering 90% ABV.

James May referred to the youthful three year old version of X4 in his TV series Drink to Britain as his ‘nirvana dram’.

French drinks giant Pernod Ricard recently launched a campaign, “Age Matters”, to reinforce the relevance of the age statement for single malt whisky which is being questioned by a new wave of smaller distillers.

Bruichladdich MD, Mark Reynier, said about the X4+3: “the ‘+3’ refers to its age in cask; yes its young, yes its high strength, yes its controversial. We were just fascinated by the 1695 reference to usquebaugh-baul, the Gaelic for perilous whisky, that we had to give it a shot.”

“Of course this is a work in progress. We are maturing part of the X4 in brand new oak casks where its astounding purity and strength is drawing out flavours never experienced before in a Scotch whisky.”

“It’s very exciting; it shows you just what can be achieved with exceptional raw ingredients, a bit of distilling skill and whole leap of imagination. This result proves if you take your time to do it right you don’t need half a century to pass on by.”