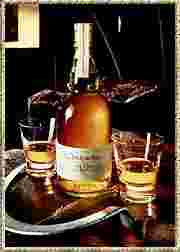 Glenkinchie lies, as the name might suggest, in a glen of the Kinchie Burn near the village of Pencaitland, East Lothian. It is situated about 15 miles from Edinburgh. The distillery is set in farmland. The name 'Kinchie' is a corruption of 'De Quincy', the original owners of the land. Its origins date back to around 1825 when it was founded by brothers John and George Rate. The original name was Milton Distillery. The brothers probably renamed it in about 1837. In 1969 the distillery stopped malting its own grain and the malting floors were turned into a museum of malt whisky.

The Glenkinchie label was relatively little known until 1989, when United Distillers started marketing it under their Classic Malts brand.

The Whisky:
The standard 10 year old Glenkinchie has now been replaced by the standard "12 year old". This is a fairly typical lowland whisky in that it is fresh and light in character, with notes of lemon and cut grass. A sweet nose and a hint of peat make this a good introduction to the world of single malts.

The 14 year old Distiller's Edition is double-matured in Amontillado sherry casks. The sherry flavour competes slightly with the freshness but does not overpower it.


South and East of Edinburgh lies the farming country of East Lothian. Here, at the heart of the farming community south of Tranent, since the early 18th century the barley had often been grown on land manured with local seaweed, ripened earlier and was lighter than grain grown elsewhere in Scotland - qualities that are now prized in the Lowland malts made from it.

The Glenkinchie distillery was founded between 1825 and 1833 by the brothers George and John Rate. It is now part of the Diageo group. The malt is also used in blends, among others Haig, Johnny Walker Red and Black Label, Buchanan and Dimple.

Today, with just two Lowland distilleries left in production (the other being Auchentoshan), Glenkinchie is a veritable ambassador of the elegant, floral Lowland style.