This is a drink for special occasions and special people. A drink for you who has discovered the Swedish malt whisky and wants to experience further subleties. Here is what you have been looking for.

We like to do things our own way. This is one of th 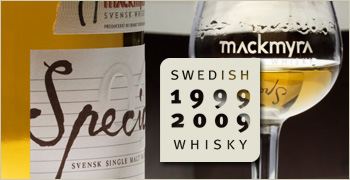 Something to celebrate
A decade has passed since the concept of a Swedish malt whisky was born. A decade since the very first drops were distilled and the drink started to take form. History was written and Sweden became a whisky nation.

Swedish oak
The flavours have their roots even further back in the past. Over more than a century, a fiery spiciness has developed in Swedish oak. Now it lends depth and character to this anniversary whisky, against a balanced background featuring hints of vanilla from bourbon casks.

Limited edition
We are constantly striving to evolve. That is why there is a wide range of flavours in our warehouses. The very best of them have been combined to make Mackmyra Special, a limited edition series for special moments.